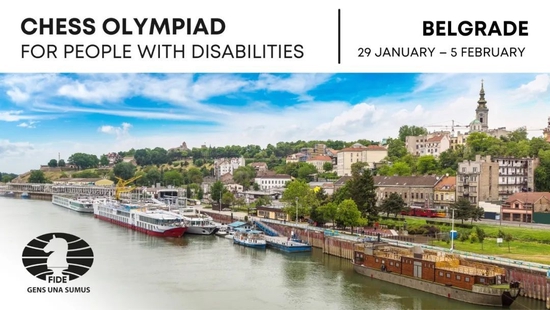 The International Chess Federation announced on the official website on January 6 that the Serbian capital Belgrade will host the first disabled international chess Olympic group competition from January 29 to February 5, 2023 (referred to as “Disabled Olympics”).

A total of 30 teams of the disabled Olympics participated in the competition, and there were four sets in the competition.Among the 30 teams, 27 teams are selected according to the level, and the chairman of the International Chess Federation can nominate up to four teams.If the number of participating teams is strange, the host association (Serbia) can send a second team to participate.

Each team is composed of four players, which can include hearing obstacles, chess players and vision disorders.Each team should include at least two chess players.It is recommended that each team contains a female chess player.

The competition is six rounds of Swiss.The time is: the first time limit is 40 steps per square meter, and the second time limit is dry for 30 minutes.From the first round, each game of chess will take 30 seconds for each step.