In the first week of 2023, Shenzhen Lottery buyers ranged the festival and won the “opening of the door”, winning the first annotation of 10 million prizes in Shenzhen Sports Lottery in 2023!

The winner of the winner has always liked to buy a super Lottery. The selection method is mainly selected by the machine.On the day of the lottery, it was at the same time of Guangdong Sports Lottery and Shenzhen Sports Lottery. As long as you buy 10 tickets, you have the opportunity to get double gifts.Therefore, Mr. Nian has recently purchased 10 bets.He said that such activities are very interesting and can often get gifts.

Mr. Nian will watch the live broadcast on the Chinese Sports Lottery Mini Program for each issue, so he knew that he had won the award on the night of the lottery, but he was not particularly excited.He said that after so many years of buying lottery tickets, he knew that the winning prize was not regular, but he could not find it, so the buying attitude was very peaceful.”I have won the second prize several times before, and I have passed with the first prize, and there is no regret. Therefore, when I saw the first prize on the first bet number on the lottery that night, I was not particularly excited.I just feel so happy. I have finally returned in the past for so many years. “

After winning the prize, Mr. Nian also specifically told the good news that they had a good buddies, because they had always said that they had never seen the first prize of the people around them, and also said that the selection was even more impossible to win the award.Mr. Nian said: “Sports lottery is a national lottery. I trust the country, so I have been buying it. I also believe that any lottery method has the opportunity to win. As long as you persist, good luck will always come.The sports lottery award is true. And buying lottery tickets is to do public welfare. We can do what we do, participate together, and make some contributions to the public welfare cause.It will be used to buy a house to improve the living conditions of the family.

Mr. Song, a salesperson: hope that good luck has always been with

The sports lottery physical store, which is a prize of 10 million prizes, is located in Liangang Bei New Bridge Xixiu Lane, Ailiangang Bridge in Longcheng Street, Longgang District. According to Mr. Song, a agent, it has been operating the physical store for about 6 years. This time is the first one.I won the award, “I have won some small prizes before, and I feel very happy. This time, I was hit by the award.” He said that it was very beautiful to get the door opening in the new year. 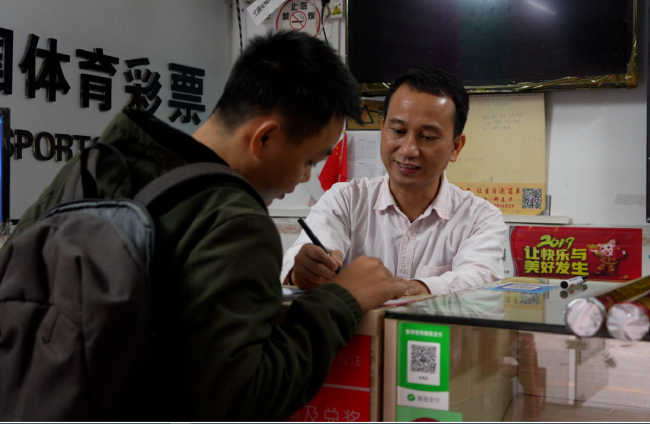 After learning about Mr. Song’s physical stores, neighbors came over to congratulate him and bought a few bets.Mr. Song also responded to the guests who entered the store.”Basically, the old friends who come to my store to buy lottery are basically old friends, and I often communicate with them to buy lottery experience.” Mr. Song believes that buying lottery is entertainment, and you can’t take the winning prize as the whole of life. “I usually warn the purchase of buyingThe colorful person must calm down the mentality, not to see the winning prize too important, let alone put the future on the invisible ‘luck’. “

Tickets: You can enjoy double gift tickets for single tickets over 10 bets

The dual gifts of the ten million awards of Mr. Nian are still continuing.Among them, the “Super Lotto No Prize of Lotto also won the prize and a prize”, which is launched by Guangdong Sports Lottery, launched from December 24, 2022, and will last until March 11, 2023.Purchase the super lottery lottery ticket without winning the betting method, you can get the corresponding gift ticket.Among them, the single lottery with a single lot of 10 bets is a super big lottery lottery.

At the same time, Shenzhen Sports Caixing is carried out “Ji Xing Gift Tickets” event. It was originally planned to end on January 11th and now extended to the end of January 18.During this period, the lottery buyers buy super Lottery or 7-star single tickets in the Shenzhen area. If there are 2-5 music stars logos appearing on the ticket surface, you can get 20 accordinglyGift tickets for Yuan-500 yuan.

Therefore, during the event, the Shenzhen lottery buyers buy super large music single tickets to multiple bets, and they can participate in the above -mentioned dual gifts. 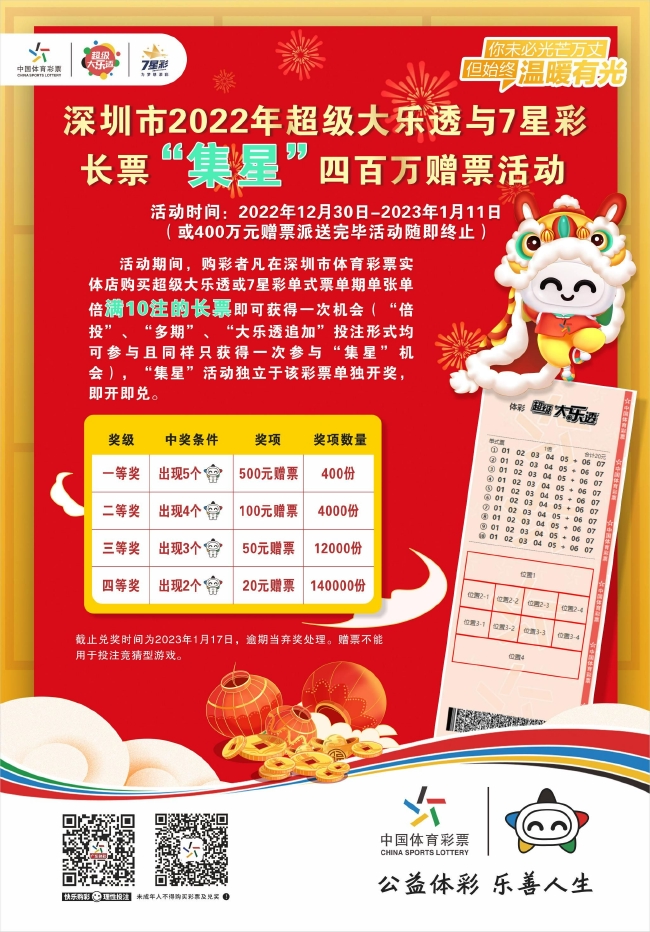 Issue 005 He Ming Dato Forecast Award: Recommended two yards in the back zone