Madexing rumor Li Tie has fight with Guojiao: The cost of making rumors is too low 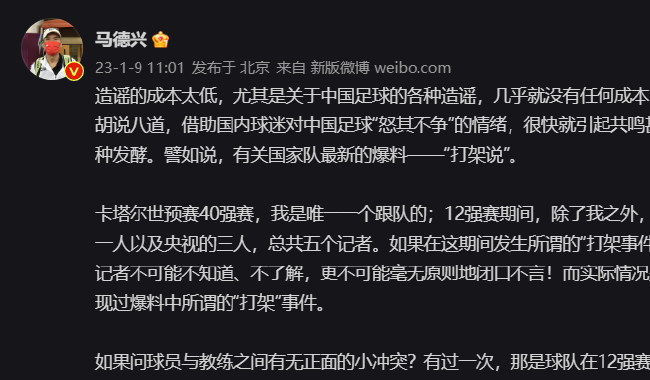 The cost of making rumors is too low, especially about various rumors about Chinese football, almost no cost, open mouth, nonsense, and use domestic fans to “anger their anger” for Chinese football, which soon causes resonance or even further further.Various fermentation.For example, the latest news about the national team- “fighting”.

I am the only one with the 40th preliminaries of the Qatar World Championship. During the Top 12, in addition to me, there were one of Xinhua News Agency and three of CCTV, with a total of five journalists.If the so -called “fighting incident” occur during this period, five reporters cannot know or understand, and it is impossible to close their mouths without principle!The actual situation is that the so -called “fighting” incident in the news has not occurred at all.

From the perspective of protecting the players, this matter is not public. After all, the players are still young, and there will be a long way to go in the future.And when confirming that it was defeated, he did not want to let the player fall into the storm of “because of the not observing the team” on the grounds of the player’s “family reasons”.

In addition, the entire team did not have any other accidents during the entire 40s and the top 12.But unfortunately, to this day, Li Tie, the former head coach, has caused various speculations and even the “breaking news of breaking news””.

The overall Chinese football has been disappointing over the years, especially the achievements in the competition make Chinese fans quite dissatisfied.As fans and reporters, we can criticize and accuse, but we firmAll kinds of “out of nothing” and “nothing wrong” are a desecration of “football reporter” and “football media people”!